One Decision: Nima is a Rechargeable Device

This is part of a series of blog posts on decisions we’ve made in the course of business, to provide some insight into our business and product development process. Posts are not chronological. This post examines decisions around why our product is a rechargeable device. 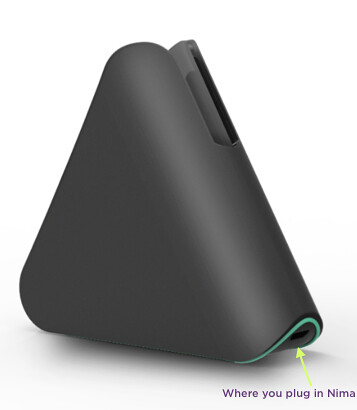 In the case of some fitness devices, you may have a small watch-sized battery. For others, they must be recharged every few days. Your TV remote most likely uses AA batteries. Your mobile phone may be charged in your car, at your office or any spare outlet.

As we designed Nima, we had to make a decision about how to charge the device itself. Would we use disposable batteries or make the device rechargeable? To decide, we had to know how much power the device would need each time it was used, the number of tests people would want to run in a single session, how much power the bluetooth integration with software would drain, among other questions. We also had to think about charging within the bounds of what makes the most sense for people who would be using this device. Since we’re headquartered in San Francisco, we were also pushed to think about if we should include inductive (a.k.a. wireless charging) to make it extra cool and high-tech. No, it’s too much added complexity, size and a potentially whole extra product to design (the charging station itself).

Answers to some of these initial questions led to a rechargeable device, allowing us to have full power, to conduct a fair number of tests and then sync.

Once this decision was made, we explored various ways to charge the device and settled quickly on micro USB. Micro USB has a discreet spot for the plug on the device so the product still looks beautiful. Micro USB is standardized, so if you have other chargers sitting around the house, you’d be able to use those to charge Nima, too. There’s also a benefit to the design in that these components are readily available, and we didn’t have to create some custom solution that would make it hard to source. One consideration with micro USB is that it is not structural. For example, charging stations that you’ve seen for an iPhone (where the charger supports the iPhone to stand upright) work because the iPhone charging connector provides structural support in addition to the electrical connection. Micro USB doesn’t provide that structural support. Since Nima sits upright, we decided this wasn’t an issue and didn’t need the potential feature of having a charging station built for the product.

With Nima, all you’ll need to do is plug in as you would your phone or wearable, charge and go!