A popular blog posts of ours is “How much is too much gluten?” The last of these photos shows just a few crumbs on a fork is still too much gluten. Many people who don’t have any gluten sensitivities look at that and think: how can that be?

How much is 20ppm of gluten, really? Is it less than a forkful? Yes.

20 ppm of gluten is truly microscopic, and here we discuss a recent encounter with gluten-laden baked goods. 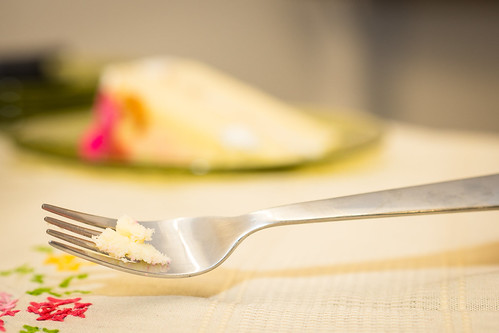 Recently, we held an event at the Nima offices. We ordered gluten-free cupcakes for the event. When our people operations lead went to pick these up, she asked if these were cooked in a dedicated facility. When we learned they were not, we decided to test one. As detailed in this blog post, Nima displayed a frown. To understand exactly how much gluten was in the cupcake, we performed full lab testing on the cupcake. The results came back with a reading of 84 ppm. When we shared this, a few people asked if that were the same amount as a regular cupcake – meaning, did we accidentally get a regular cupcake, or was it just cross-contamination?

We’ve found that regular gluten foods can have upwards of tens or hundreds of thousands of ppm of gluten. So, the “gluten-free” cupcake was likely just cross contamination from being produced in the same facility.

To give you some idea of what 20 ppm of gluten looks like, here are some relative measurements. This also shows how high the level of detection Nima has in order to be able to find those trace amounts of gluten! 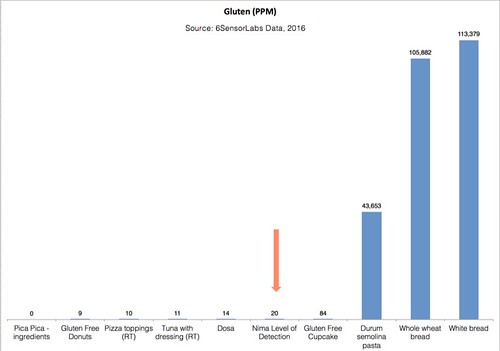 We’ve got the raw data for you too. As you can see, that US FDA standard of 20ppm of gluten, is a very minute quantity. The items starred are ones that our device detected as having gluten. We then verified the level with additional lab testing.

What Could Have Gone Wrong? Why Does Gluten Show Up?

This chart gives you the idea of the difference between foods filled with gluten and those that are made with gluten free ingredients, but which may have acquired some gluten in the production process. For example, the tuna may have been fried on a grill that had some toppings from other meals, or the dressing may have had some flour in it. The dosa, while made with rice and daal, may have been cooked in the same place as other gluten-containing foods or trace amounts of flour might have been in the batter. We hear often of soups, creamed vegetables and salad dressings that use flour as a starter or thickener. Sometimes, it’s in the kitchen. Someone takes butter, butters their bread, and goes back into the butter, thereby contaminating it.

Since there are no regulations for restaurants when labeling menu items gluten-free, you can see that “gluten-free” can represent many different levels of gluten, which can be troublesome for those who are trying to avoid microscopic levels of it.