In August 2015, Nima and Black Fig Research conducted a study with people who avoid gluten to learn more about the things they avoid and their attitudes toward dining outside the home. We compared two groups of people: those who have someone in the house with celiac disease (referred to as celiac throughout) and those who avoid gluten for other reasons (which will be called gluten avoiders for clarity).

We can say to both groups, you are not alone in your feelings. Avoiding gluten (well, having any dietary restrictions) can be emotionally exhausting. It can also just be difficult to navigate life on a daily basis as people and places don’t truly understand the needs you may have.

Restaurants, those who avoid gluten want you to know they know the onus is on them to ask questions and monitor dishes for their own health. That said, a little more knowledge from front-of-house staff would go a long way toward helping people to feel safer (and make them dine out more frequently)!

These are key questions that people who aren’t familiar with the gluten-free community ask us. So we did some research in August and decided the answers were really interesting and worth of sharing. The research only looked at gluten free people in the US. We looked at two halves of the community. Those with celiac and those who avoid gluten for other reasons. There are some material differences between the two groups that you can see as you go through these questions and their answers.Those with celiac disease are referred to as celiac throughout and those who avoid gluten for other reasons are labeled as gluten avoiders for clarity.

We asked for whom in the household people monitor gluten intake. Gluten avoiders are more likely to be monitoring gluten for more people in the house. Small numbers of people are monitoring for kids only – 11 percent of people in the celiac group and 5 percent of gluten avoiders. Each group was equally likely to monitor for themselves only – nearly half! This finding does suggest that when anyone has to avoid gluten, it does become part of the fabric for the entire family. We see this time and time again at expos or in the comments/emails we receive. Spouses, parents, aunts, uncles, cousins and kids all tend to look out for family members who need to avoid gluten. While we only capture those in the immediate home environment in this question, it’s notable how aware and sensitive other family members can be, as evidenced by our conversations elsewhere. 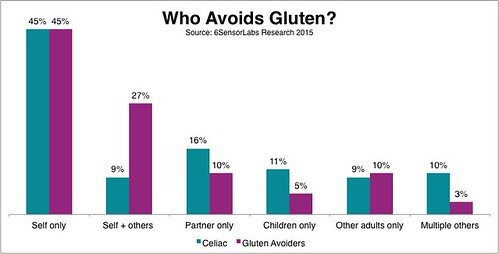 
What Besides Gluten Do These Groups Avoid?

When it gets into the reasons why they avoid gluten, you can see that gluten avoiders stay away from more specific items in their diet than the celiac group does. In fact, they are significantly more likely to avoid everything we asked about, which means this group is more conscious overall about what they ingest (or what those in their household are ingesting). 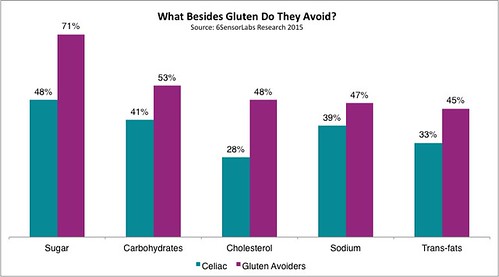 Q: Which of the following food ingredients do you actively monitor for yourself or for a member of your household?

What Conditions Do People Who Avoid Gluten Possess?

We wanted to understand a little bit more about why people avoid foods. We focused on asking only those who were monitoring gluten for themselves to respond to this question. The gluten avoiders are conscious about what they are eating for general wellness and health. Comparatively, those with celiac disease are significantly more likely to also have food allergies, IBS, Crohn’s disease or ulcerative colitis. While these latter digestive conditions are still only a subset of those with celiac, it does show that people who have to be vigilant about their diet for celiac disease may have multiple reasons as to why they must avoid gluten. 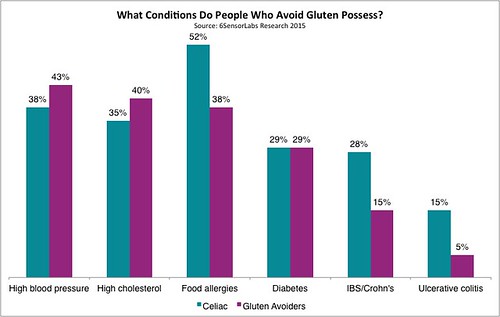 Q: Have you or has a member of your household been diagnosed by a physician with any of the following conditions?


Do They Use Support Groups?

How do people cope with their need to avoid gluten? We asked folks about their use of support groups, which less than half group find useful. Fifty-nine percent of gluten avoiders and 54 percent of celiac say they use no support group. Of those who do use groups, there is equal interest in those led by doctors/nurses and other in-person groups, whereas online groups are more compelling to celiac. Not to say these groups can’t be powerful. In fact, many celiac have said that these support groups prove powerful after initial diagnosis. People across the spectrum of gluten avoidance share the inspiration they find in people who blog about diet, food tips and general life without gluten. 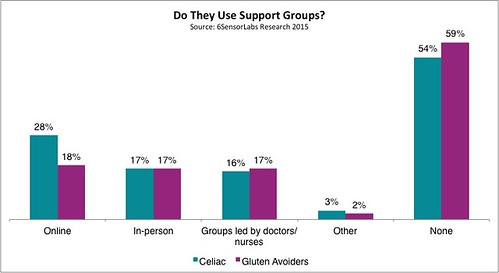 Q: Do you participate in any of the following types of communities/support groups for individuals who actively avoid gluten?


How Do They Feel About Avoiding Gluten?

We did ask people “How do you feel about having to actively avoid gluten when eating, and the potential adverse effects of accidental gluten ingestion on your body?” Clearly there exists a broad set of emotions – and likely everyone has felt each of these about their need to avoid gluten at some time.

The dominant emotion for celiac is one of acceptance. It should be noted this was only felt by 57 percent of people – suggesting there’s a lot to be done to further this within the wider community to help people see there are tools, communities and peers who understand the day-to-day difficulties of navigating a gluten-filled world. If you don’t have a need to avoid gluten, educate yourself about the reasons why – it will help build empathy for how people struggle. Some key negative emotions are felt by about a third of the celiac community: anger, social isolation, feeling hassled and feeling overwhelmed. It can be difficult to exist in a world not set up for easy school days, business meals or travel. On the positive side, nearly half do say they feel “in control” – and this speaks to what people tell us every day. They feel so much better now that they avoid gluten and it provides a certain agency so they manage their life for better health.

Gluten avoiders are more likely to say they are confident about their need to actively avoid gluten. They are more likely to say they are “in control.” This latter item is likely due to the fact this seems to be more choice-based or for overall general health. There is less negativity associated with this audience. However, a quarter say they feel overwhelmed and hassled. Negativity when dining out can wear people down, and it is important for dietary choices and needs to be respected by everyone – there is a huge social impact as people try to exert their own choices made for their health and their friends, co-workers, and the public treats it as unimportant. 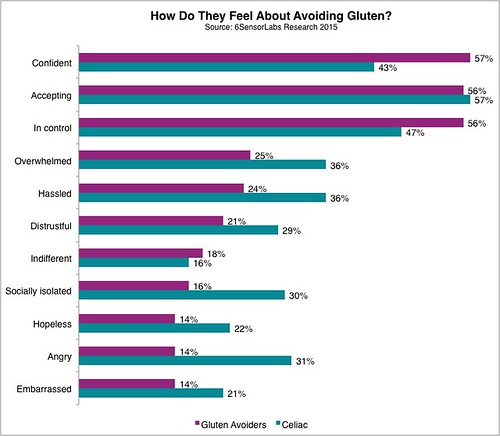 Q: How do you feel about having to actively avoid gluten when eating, and the potential adverse effects of accidental gluten ingestion on your body? Please indicate the degree to which the following adjectives describe you.


How Do They Feel Avoiding Gluten When Dining Out?

Dining out tends to be the hardest thing for many who avoid gluten, especially in situations when people have no choice (think weddings, business dinners, reunions, potlucks, family dinners where they don’t cook, etc.). Some people have told us they don’t eat outside the home because it’s just too tricky.

The number one thing people say is that feeling better is worth the effort of avoiding gluten. Eighty-eight percent of celiac feel this way, while four out of five gluten avoiders say the same. This response reiterates the importance of respecting dietary needs, whether it’s for celiac disease or other health-related reasons. If it makes someone feel better, why wouldn’t we want to support and help them?

It’s important to note that while most (four out five for both celiac and gluten avoiders) feel the responsibility for monitoring gluten belongs to them, roughly the same amount feel that restaurants have a responsibility to indicate food allergens on their menus. The majority of both groups also want a better way to tell if foods contain gluten. And guess what, restaurants? From our one on one interviews, we also hear “if you can’t serve me, just tell me!” So it’s fine if you can’t accommodate someone, but be up front about it. There’s much less disappointment that way and makes it easier for someone avoiding gluten to move on to the next stop. That said, even small disclaimers on menus can be helpful for people as they try and make safe eating decisions.

While nearly three-quarters of both groups said their families are supportive (and we’re hoping the other 25 percent get on board), it looks like friends could put in a little more effort. Most friends are there for celiac and gluten avoiders, but it’d be nice to see those numbers soar.

The positive news is that people who avoid gluten don’t feel it’s entirely impossible to eat out (that said, nearly a third of celiac say it is impossible), likely because very few people felt that restaurants understand their dietary needs. Along with improving menus, if restaurants expanded their knowledge about dietary needs, it might attract more people to their tables. 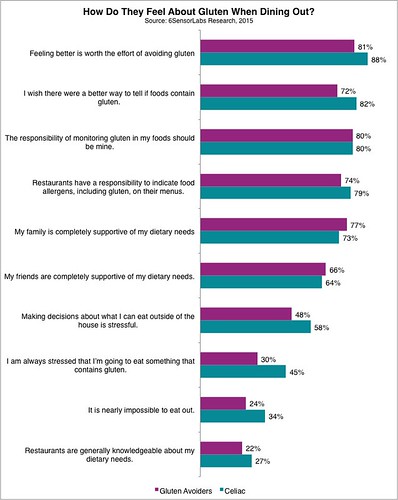 
Where Do People Want to Test?

Specific to Nima, and the ability to test food, we asked people if they had to allocate their tests, where would they want to test their food. The top spot for celiac is restaurants – with all out of home occasions almost three-quarters of the need. Gluten avoiders were slightly more interested in testing groceries. 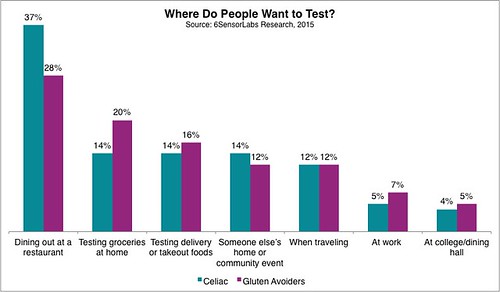 Q: Please think about the occasions on which you would use Nima. Please estimate the percentage of your usage that would fall in each of the following categories. (Enter a percentage for each situation. The total should sum to 100%).


Who are Celiac and Gluten Avoiders?

For research folks out there, we collected this information via an online survey. To qualify for the survey, the respondents had to indicate if they or someone in their house avoided gluten. Following that, people were asked if they or anyone in their house had celiac disease. The sample was then split into two populations – one of celiac disease (n=300) and one of those who avoid gluten for any other reason (n=300). The survey was approximately 10 minutes and was fielded in August 2015 in partnership with Black Fig Research. Statistical differences are cited at a 95 percent confidence interval.