Is It Gluten-Free? What Foods People Want to Test

The fundamental question of “is it gluten-free?” is what drove our founder Shireen Yates to start our company, and ultimately bring Nima to you.

In a story she has shared many times, Shireen discovered a wide variety of food intolerances and allergies during her college years – wheat (gluten), dairy, soy and egg. She is a good cook and survived a lot of home cooking and due diligence at restaurants. No matter her personal diligence though, there were times when she was unable to be in charge of the food she was eating in certain situations, such as travel, work dinners and weddings. At a close friend’s wedding, a waiter walked by with some delicious-looking arancini (risotto balls) – Shireen asked the server if they were gluten-free. The response was “How allergic are you?” Shireen knew there had to be an answer that was better than that. Given the technology available, she envisioned having a device she could use as a quick test of the food and answer the question of “is it gluten-free?” for herself.

Is it Gluten-Free: What People Tell Us they Want to Test

Over the past several years, we have compiled a list of the items people are most interested in testing to find out how safe they are for gluten-free diets. We started by asking people in person, have listened to people at gluten-free expos, read inbound emails, and did a survey last fall. 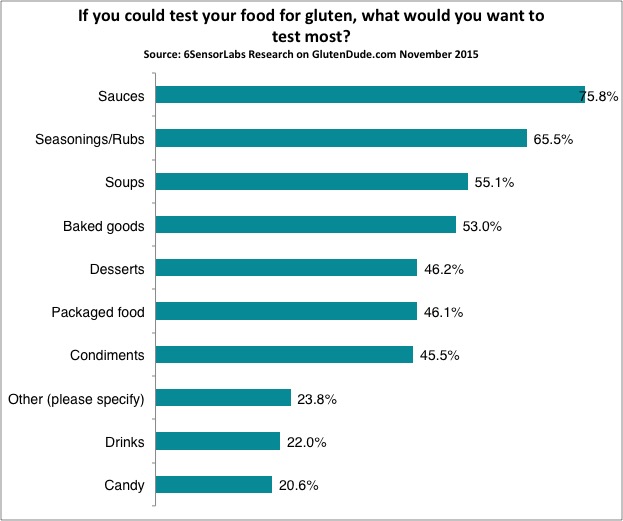 Is it Gluten-Free: What People Did Test

Once we got devices into people’s hands during beta testing, things shifted a little bit. Some new items began to top the list of things for which people wanted to know: is it gluten-free?

Results varied for many of these items. In many cases, tortilla chips were gluten-free, but sometimes corn tortillas had gluten. As one of our beta testers said, ” for gluten-free tortillas, you need to go someplace where they make them from scratch. Now I know not to eat them from this place anymore.” Chain restaurants were typically consistent from place to place for gluten-free dining, but smaller places might have cross contamination in a fryer. In some cases, people wanted to know if other items were gluten-free such as medicines and vitamins, which have not been tested with Nima.

As seen in our restaurant testing, sometimes even the same dish on different days yield different results. Event different brands of packaged spices and rubs tested differently for gluten. So a food that might be gluten-free one time might not be the next time you eat it. There’s truly no single answer that persists for “is it gluten-free?” Ongoing, real-time testing is the best way to be confident that each meal is gluten-free.