We’ve been working on bringing Nima to you for almost three years and could not have gotten this far without lots of great feedback from people who need it along the way. We’ve done everything from surveys about people want to test to live webinars with lots of Q&A to sending out non-working prototypes to people.

The best part started at the end of 2015, when we shipped a bunch of working beta versions of the product out to a small group of people around the U.S. who avoid gluten for a variety of reasons (everything from celiac disease to Hashimoto’s to severe intolerance).

There were several caveats to these early units – including a higher chance of failed tests and knowing that there were some bugs in the firmware. These issues are expected, as every hardware company knows, so at every stage, we have worked and continue to work at improving the device and reducing these issues.

What we really wanted to understand in our beta testing was the experience of using Nima itself. How easy is Nima to use? How can we make it the best possible device?

Ease of use is where we have focused the majority of our energy. From our round of testing that began in December and ended in January, we made some real changes and then had another group of beta testers around the country use Nima again this March and April. We received some additional feedback about the product and are in various stages of implementing these insights into the final product and before our third and final round of pre-launch testing:

Better instructions for the amount of food needed for each test

This continues to be one of the most critical things for us to guide people using the device for the first time — it’s really a minute amount of food that is needed for a test. If you over-stuff the capsules, you’re more likely to get an error. Some people were worried they weren’t putting enough into the capsules. Since Nima works on both liquids and solids, there’s another layer of complexity. In our second round of testing, we included these photos as guidelines, we added a fill line (hand-drawn!) on the capsules. 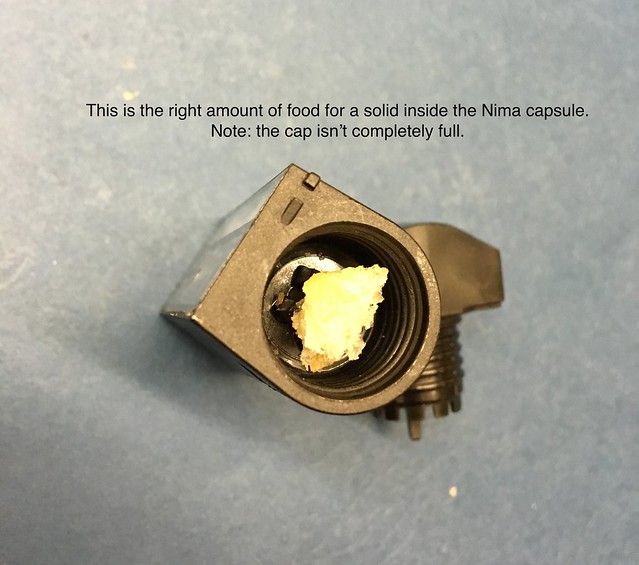 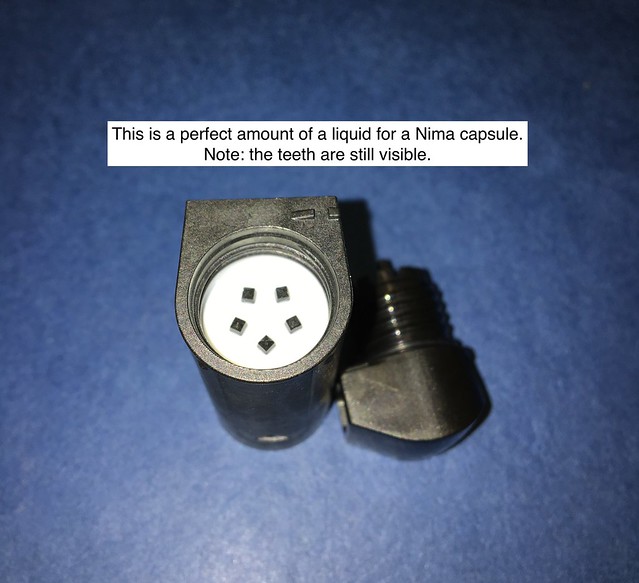 Despite this, we see ongoing needs to explain how much food needs to be added. We’re working on a sleeve that will go around the capsule with illustrations and more specific video based instructions.

Confusion around which end of the capsule to put food into

It’s funny – when you have a capsule and both ends are sort of hollow, it’s easy to make a mistake as to which end gets the food! We listened to the round of feedback from our first testers and did a couple things for our second round of testing. One we labeled all the capsules by hand (this will be replaced by that nice new capsule label) with the word “food.” Two, we explained in our instructions to place food in the end with the “teeth.” Both of these seem to have made a huge difference. If ever in doubt, just remember “feed the teeth!”

We had seen this issue in some usability testing before we began beta testing – people had a hard time inserting the capsule in the device. When you’ve been working on something for years, like our team, how it all fits together makes sense to you, but for people using Nima for the first time, this kept them from feeling like the process was as easy as it should be. We added some visual indicators by hand for this most recent round of testing, so people could see how the capsule top lined up with the device. This seems to have eliminated most of the issues, which means we’ll be making some small visual changes to help people understand this before we begin shipping the product.

One thing that surprised us was that people missed test results because they were busy socializing or eating something else. We added previous tests on the device display that could be accessed by hitting the button to show recent tests. This process wasn’t necessarily intuitive in the interface, but conceptually this addresses the problem. In the longer term, this will work with the app, but even without the app, you’ll be able to see recent tests. We’ll also work on updating some FAQs and instructions so this will be clearer for people.

We also tested two different ways to start the test (one had a single press, the next test had one short and one long press), so we’ll continue to make some small changes here, so it’s absolutely intuitive.

If you’re using an electronic device that runs on a rechargeable battery, it’s critical to know when you need to recharge. Nima has been designed to last for about 20 tests, if not more, which should have been sufficient in the beta test itself where people were doing about 10 tests. We were really surprised during the first beta test at how many times the device needed to be recharged, which is why people kept requesting an indicator. When we got the devices back, we found a bug in the firmware, which was causing the devices to run down the battery. We’ve fixed both that bug and added an indicator. The April beta testing revealed all worked well here!

Pouch or carrying case for device

Smaller packaging for the capsules

The capsules were in temporary packaging, which shrunk for the second test. No complaints in the second round, so seems like we’re a little closer here!

People did come across contaminated food in their testing and then realized they wanted a little help with coming up with some things to say. We provided some conversation starters in the next round of testing. We’ve also expanded this answer in our FAQs with some ones we’ve used in our own testing!

Status: we won’t be able to test for it, but we have shared some information about why

We’ve written some expanded answers explaining the science behind why Nima can’t test for soy sauce, gluten free beer or other hydrolyzed gluten. As stated in the blog post, no good solutions exist to do this sort of testing, so you really have to exercise caution when these are potential ingredients and conduct your own research.

People in our first test got a taste of what it would be like to sync with the app, asked for some more specifics, and we’ve also added in some new ideas. One big one was a desire from people to be able to share results for packaged food. We’ll be sharing more about the app and its features in the weeks to come.

While people often skim the instructions, others read every single line and pore over every image. Instructional design is a whole field unto itself, and we’ll be working with some experts to make certain our instructions are thorough yet succinct. Adjacent to instructions, we’ve had a lot of requests for more video. We’re working on these, and will continually be updating our online FAQs with both videos and new questions as they arise.

Provide more detail around the level of gluten present

For many, just knowing gluten was present was sufficient. Others wanted to know how “dangerous” a give food item might be. They asked if there were a chance we could share more quantitative data around the parts per million. We had already considered the potential of sharing some feedback on low, medium or high levels of gluten in the app. It’s something we’re exploring.

We appreciate the feedback of all of our beta testers around the country, especially as they’ve been patient with things that aren’t quite perfect — yet. Having a broad base of folks around the U.S. allows us to see the different places and food that is being tested. People with diverse backgrounds and needs help us to create instructions and designs that can work for the most. We’re now just excited to get Nima into your hands!